As Ireland faces the consequences of its economical difficulties and the harsh demands expected to come from its lenders, perhaps it should remember the case of Argentina.
When it faced financial ruin in 2001, it pulled out its middle finger and told the supposed saving grace known by the three famous letters I, M, and F (whose negligence had been one of the causes of Argentina’s problems in the first place), to pretty much stick it with the ridiculous austerity measures it tried to force on the country. Argentina spent the next five years enjoying an average growth in GDP of 8.5%.
For those who can’t recall the details of Argentina’s absolute meltdown in 2001, the somewhat basic history is this.
The Eighties and Nineties
After a return to democracy in 1983, the Argentine government of Alfonsín borrowed huge amounts of money. When the country struggled to repay the loans, confidence in the new currency, the Austral, was lost and inflation went through the roof. In July 1989 it was 200% alone, reaching a total of 5000% for the year.
To cope with the hyperinflation, Argentines would spend nearly every cent of their pay-check the same day they received it. If not, their hard earned cash would be worth nearly nothing by the next day as shop prices literally went up by the hour.
Desperate measures were necessary and in 1990, with a new government and mandate, the Argentine peso was restored, and so started the notorious experiment with convertibility. One Argentine peso was fixed as equal to one US dollar, and any citizen was able to exchange any amount of pesos to dollars as they pleased. 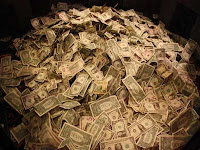 Get your pay-check in pesos, change it to dollars, stick it somewhere safe, travel abroad and feel rich all of a sudden. Everything in neighbouring Brazil for example was now dirt cheap with dollars in your hands, and Argentines could not only afford cheap imports, but were able to take out low interest loans in US dollars.
On the surface, life was rosy in the nineties. But behind the scenes problems were bubbling away.

Inflation was soon back. And with prices for many consumer goods now lower in the USA, the famous expression ‘dame dos’, (give me two), took hold as Argentines marvelled at the cheaper shop prices abroad.
Cheap imports meant money was pouring out of the country, while dollar prices in Argentina meant the economy could not compete with other developing nations and so the export market crumbled. The country still had massive debts and South America’s old friend, the IMF, recklessly continued lending to Argentina, postponing payment dates and allowing the problem to brew.
The fund also put in place structural adjustment programmes so severe that they only served to lower GDP by 10%, and in 1999 Argentina entered recession. With corruption rife, huge unemployment and economic deflation, it all came crashing down with the 2001 crisis.
The Crisis
As investors lost faith in the country, money started flowing out across the borders. Suspicious and fearful of yet more financial problems, there was a run on the banks as Argentines withdrew their savings and also sent it abroad. The government reacted by freezing all bank accounts for twelve months; an act that became known as the corralito.
With mass protests and an economy spiralling out of control, a state of emergency was declared. Argentina defaulted on $95bn of debt and by 2002 the convertibility experiment was finally called off.
Argentines rushed to the banks in attempts to get out any pesos they had, and exchange them before the devaluation, but the banks literally closed their doors as they were left cashless.

Almost overnight, the national currency was devalued from one peso for a dollar, to four pesos for a dollar.
Furthermore, the economy ministry declared that any dollars in bank accounts would be converted to pesos at the new rate of 4:1, and so the entire life savings of hundreds of thousands of Argentines pretty much disappeared. 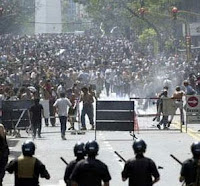 The initial consequence was disastrous. Riots and looting ensued, and when half the entire population fell below the poverty line, unemployed and broke; a barter economy was born with second hand clothes exchanged for basic services, and home-baked bread for meat. It was even common to see those with nothing to trade eating from the rubbish bins outside McDonalds.
The situation was dire and the IMF saw the opportunity to enforce further neo-liberal policies and austerity cuts. As with the current situation in Europe, many suggested their policy of making the workers pay for a mess they had nothing to do with, was entirely politically motivated.
But in 2003, with newly elected president Nestor Kirchner, Argentina grew a pair. They refused any further help from the IMF, paid off the debt and told the un-elected and foreign monetary advisors to get the hell out of the country. Argentina would be governed by Argentina, and with some shrewd policies, the economy recovered.
Turning your back on the ECB in Europe and going it alone would not be so easy for Ireland. In Argentina it seemed to work, but despite its recent economic success; with the IMF constantly making bogus economic projections, combined with the old problems of corruption and inflation, the longevity of Argentina's prosperous situation is forever in doubt.

There's a general consensus here that a crisis hits the country every ten years. 2011 will tell.
Posted by Simon Kofoed at 12:47 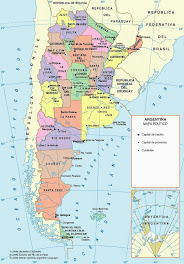